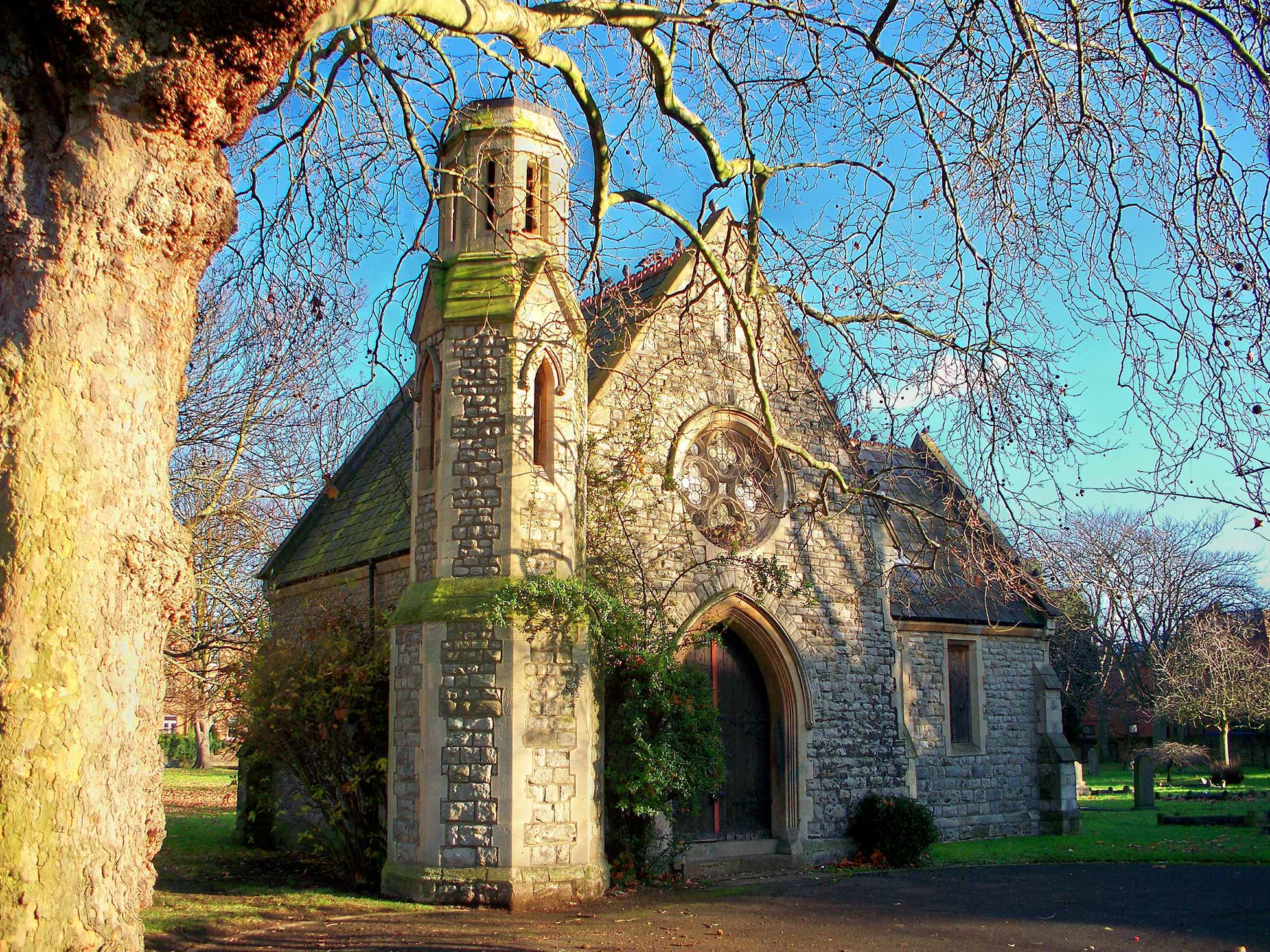 Visitors to the cemetery will have noticed that the chapel is being renovated. This will be the new centre for the gardeners once West Lodge is sold. The exterior and interior of the chapel will be renovated and all services will be installed including water and drainage.
Sadly the storm at the end of October had its effect – the greatest loss was the red plum (north west corner – end nearest the hospital). It was diseased and was totally uprooted. There were many twigs and branches brought down from the great number of mature trees we have in the cemetery.
The U3A group – in conjunction with the Friends – are making good progress in logging the grave inscriptions and photographing the graves in the sections of the cemetery either side of the main avenue.
New benches are planned by the council.
The Friends have starting some pruning work.

There was definitley a feel of autumn even at the beginning of September and through the month, increasingly there are early morning mists which give the cemetery an air of mystery. The gardeners have cut more paths through the long grass to the delight of the joggers. The paths have greened over after all that rain in September.
We heard that The Friends of Margravine Cemetery’s entry was classed  as ‘thriving’ in the ‘It’s your neighbourhood’ category of the London in Bloom awards. We gained a high mark within this category. The cemetery continues to be used daily by many, to and from the tube, for dog walking, for joggers, birdwatchers and those who just want to enjoy its countrified feel.
A project to log the grave stones is under way.
At our AGM in October there will be a talk on our Victorian beginnings, reflecting a greater focus on the cemetery’s Victorian past.

The weather turned hot and sunny at the beginning of July and by the end of the month it had turned into a real drought. The areas of long grass looked like something out of Africa, burnt to a pale golden colour. With mown winding paths amongst the long grass it felt very countrified and rather magical. Many people have commented on how lovely the cemetery is, and sunbathers and people just wanting to relax have enjoyed it alike.
We had 2 gardening sessions learning about the wild flower plantings in the round bed. We did some serious weeding and now know what is supposed to be there and what not.
We were host to 2 judges this summer – one for the Green Flag award and one for London in Bloom. We have kept our Green Flag yet again which is positive news. We await the LIB judgement.

The long cold winter delayed much of the trees and flowers. Even mid May the trees of heaven were not yet in leaf.
The chapel is being modernised for use by the gardeners. They will no longer be able to use West Lodge as it is being sold.

The beginning of March saw wonderful display of crocuses. Catkins on the hazel blow in the wind and the birds have paired up. There is some jostling for territory and loud song from the robins!
We have made a visit to the archives and found some interesting old maps of the three lodges. We were looking for drainage plans for the old buildings other than the lodges and made some useful discoveries which will be included in the next Friends’ newsletter.

We are still carrying out our monthyl bird walk. Our recent bird walk open to the public was on a very cold day but we were rewarded with an impressive list, including 2 coal tits, 2 great spotted woodpeckers and a green woodpecker 3 redstarts and a mistle thrush. We also conducted the RSPB garden watch where for one hour you record the maximum number of any species you can see at any one time. Our results were blackbird 5, blue tit 3, crow 7, feral pigeon 5, fieldfare 3, goldfinch 8, great tit 1, greater spotted woodpecker 1, long tailed tit 4, robin 3, wood pigeon 13, starling 4. We post up our sitings on the Friends’ noticeboard at the entrance to the cemetery for those interested.