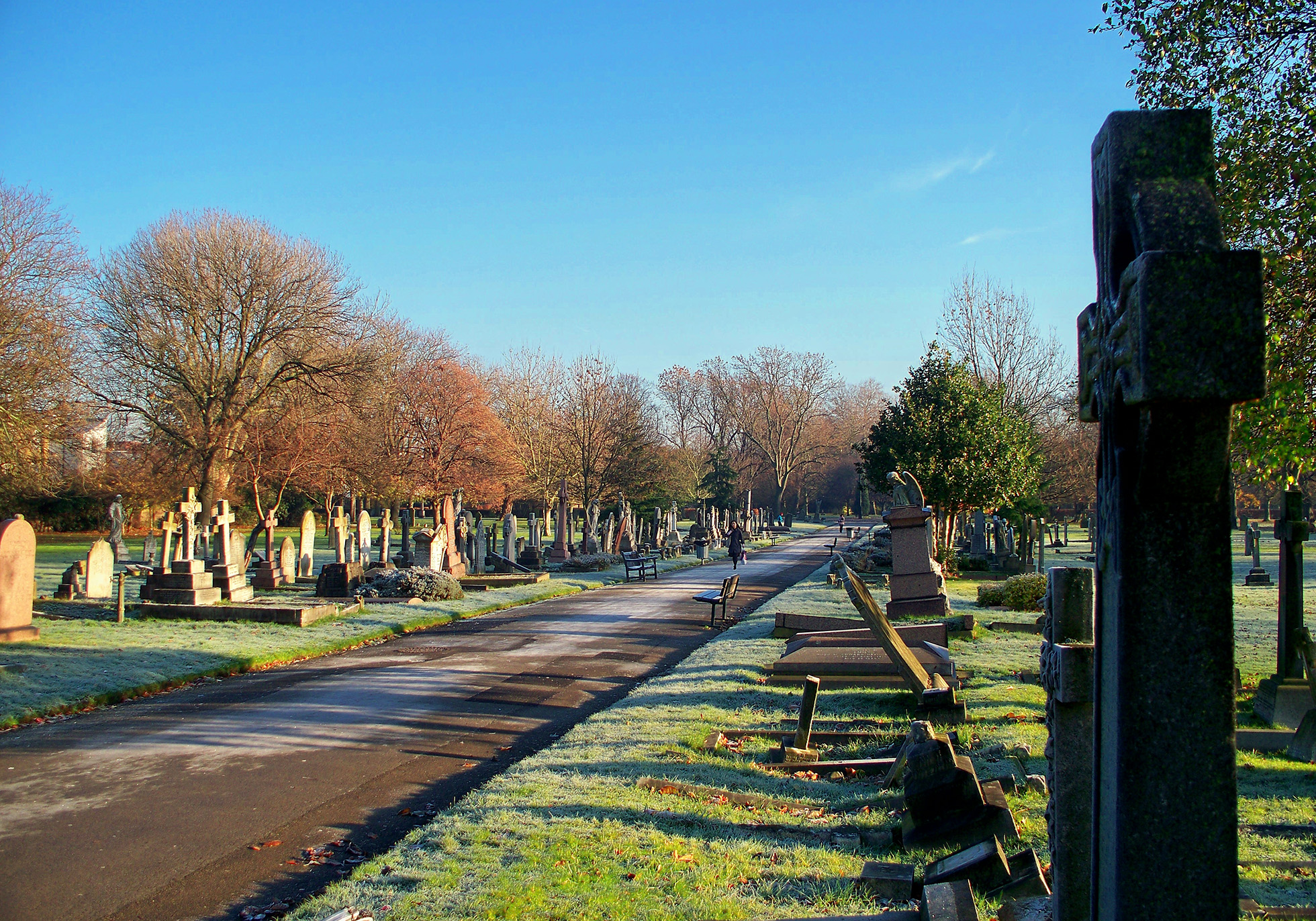 We find our big noticeboard in the cemetery near the northern gates is proving useful for keeping local people informed of surveys and events.
One notable event was that the George Broad bronze memorial (George being often refrerred to as ‘the man who cast Eros’) got pushed over. We were able with the help of J H Kenyon to have it reinstated on its plinth. George Broad’s great great granddaughter was able to be present for the occasion.
We have got back the results to our invertebrate survey and 54% of the species recorded in the summer were new to our records. The uncut grass has really benefitted the insect population and plant biodiversity.
We now have a planned succession for tree planting – starting with replacements for some of the recent losses.
The ‘short cut’ paths form the north gate to the chapel corner were getting very large and worn and muddy so the Council is reseeding the turf and have screened off the area.
We are looking very carefully with the Council at the buildings with a view to future plans. (West Lodge will be definitley be sold however).

Throughout thespring and summer there has been a wonderful succession of wild flowers in the set aside areas of unmown grass as each species reached its flowering season. The latest of note was the yarrow. Trees have also taken part by throwing up suckers through the grass! Poplars, Tree of heaven and Robinia have been the most enthusiasitic!
At the end of August we did a bat walk to find whether we still had bats. Using bat detectors we had a number of srtong calls in different locations from Pipistrelles. Next time we will do a more scientific count now that we know they are still present.
We continue to hear from families far and wide who have relatives buried in the cemetery – and sometimes interesting memorabelia connected with the burial. This is always of interest.
For those who pass through the cemetery regularly – we now have a big noticeboard in which will be able to publish our news and events when the key is delivered. For those further away you are always welcome to let us know what you would like to see on the website.

New botanical surveys are currently being done by the Council, and the Friends have also commissioned an invertebrate survey (August 1st). These should show any results from the continuing practice of leaving certain areas unmown.

July walkabout with the Council

We discussed buildings and soft landscape. We would like to see the beech hedge lowered so that all can see over it again – giving a less hemmed-in feel, and instead, a view across the cemetery.
The round central border had to wait a long time to be planted out as the plants were late in delivery. They are all native species.

These were the subject of a talk at the March meeting. There has been a drey count for the past 4 years. There has bee an increase in numbers over this time but less dramatically from 2010 to 2011. Squirrels are however stripping branches – particulalry of the limes.

There has been work on several of the trees February 2011. The planes at the hospital end of the cemetery have been pollarded; several dead trees have been removed etc. We hope in the future to have a plan for succession planting.

The chapel and other buildings

The council has made some minor repairs to the roof to make the chapel water tight. The tree that was knocking the tower has now been pruned. We would like to see restoration also of the characterful octagonal building and of the mausoleum near the west end.

You will notice a new line of very young hedging planted along the east wall backing on to Palliser Road planted by the Council as part of the biodiversity plan for the cememtery.
We are also watching carefully any die-back this spring especially at blossom time on Cotoneasters and cherries.
Work we have done ourselves has been to prune – with the help of the tree officer for the borough – hedging planted in the last few years and to weed around young plants and are currently mulching the hedge plants.
This coming summer we will schedule a bat survey.
The monthly bird count comprises all the ‘usuals’ including: crows, blackbirds, robins, blue tits great tits, long-tailed tits, jays, greater spotted woodpeckers, magpies, wood pigeons, ferral pigeons, wrens (though not in the January 2011 count),  chaffinch,  redwings (seasonal), gold finches. Less often we see ring necked parakeets, starlings, plus a few other occasional visitors such as green woodpecker, dunnock. We have not seen gold crests for a very long time.
The count includes a list of species and their numbers recorded at the same time on a particular day each month. We include those birds in adjacent gardens, but not those flying overhead or whose song we hear but without sighting. We take care not to try not to double count though the wood pigeons often move around as we walk round the perimeter – as if they want to be recorded several times! Flocks such as starling and redwing have to be as close an estimation as we can achieve.

As mentioned last year – we have many inquiries about graves of relatives. We would like to do more about collecting information about interesting graves – both about those buried here and about the monuments themselves. If you have information and old photos we would be delighted to hear from you – or if you would be willing to do some research.

The new bins are a great success!