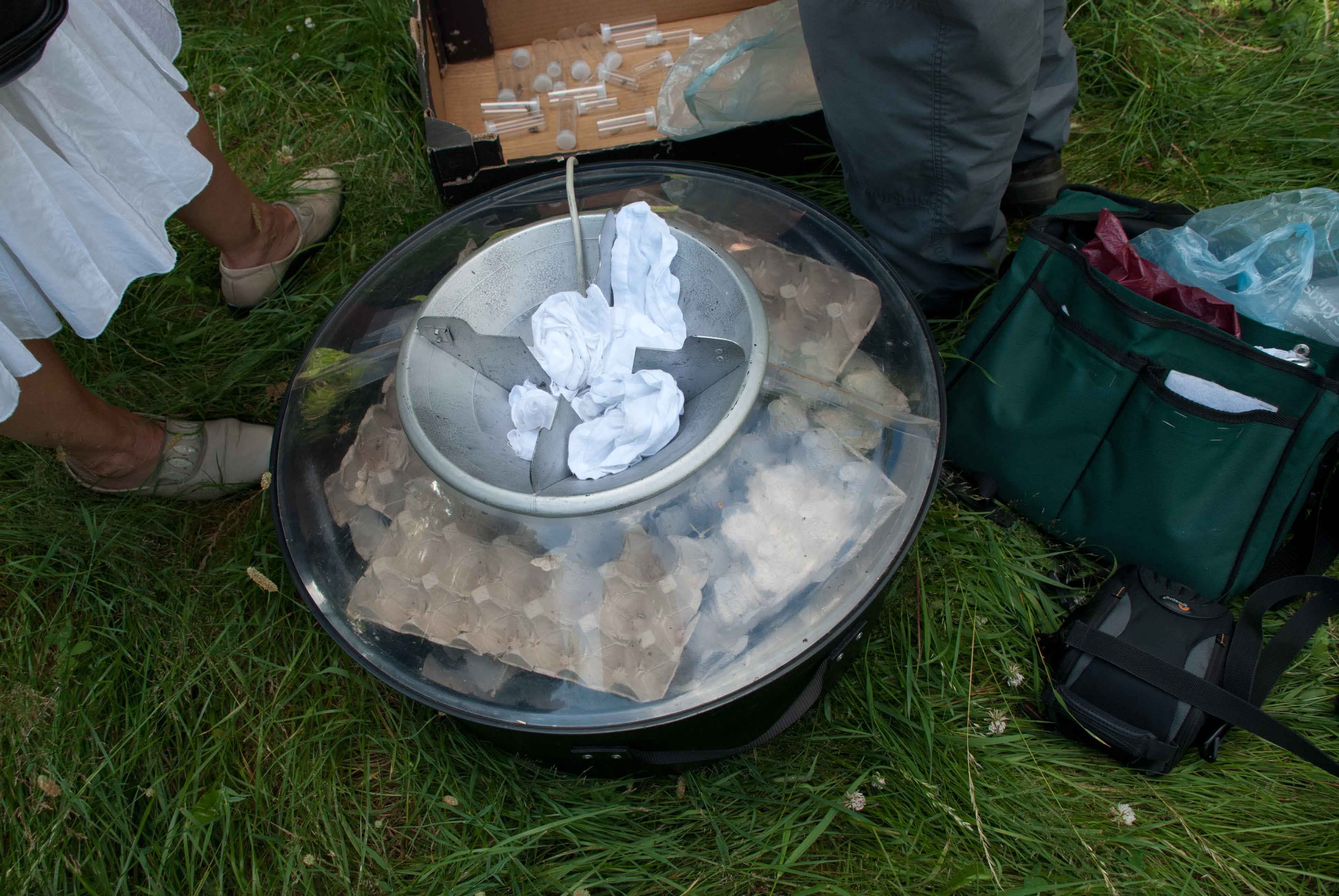 Background
For those new to moth surveys, a large moth trap (see inset) was used overnight with its big bulb lit up to attract the moths. The vast majority are active at night. They can enter but not leave, so next morning they are all resting – ready for identification – on cardboard egg boxes that are left inside the trap.

Our survey
A window of time was agreed in late July – not a fixed date. This has the supreme advantage that we could pick our night when conditions were right – light to no wind, warm and dry. We had Dr Tim Freed do the survey – a top expert who has surveyed several of the royal parks.

The location
Tim carefully chose an area of long grass with diverse species of grass and flowers– not overlooked by too many houses, and close to trees – native species. He set up the trap after the cemetery had closed.

What he might expect to find
Any of the common moths in southern England in summertime (along with flies, wasps and lacewings) native to neutral grassland and with trees nearby. We have over 2500 species in Great Britain, including many micro-moths.

The survey
Tim returned at around 6am and took out each egg box in turn to identify the moths now motionless on it.
Those too difficult to identify onsite (some of the micro-moths) were placed in a test tube in the shade. They needed to be prepared for identification. Some need a mild anaesthetic in order to examine partially hidden hind wings. The more difficult identifications need further preparation and a microscope to distinguish between similar species. This takes time and is taken into account when professional surveys are costed.
A small group – who had helped to arrange the survey – gathered later, to look at a few of the more ‘beautiful’ specimens and to make notes and take a few photos.

Results
Tim was genuinely excited by his findings – the first survey of its kind in Margravine cemetery, made possible by its initiation, support and funding from the Friends of the cemetery.

To quote Tim after his final count:  ‘Your cemetery appears to have a very interesting and unique moth fauna.’

A moth survey was carried out in the cemetery on the night of 16th July 2014 operating a Robinson-pattern moth trap utilising a 125 watt mercury-vapour lamp. A Pyrex bowl was placed over the lamp to protect from precipitation and a white sheet was placed beneath the trap to assist with collection of moths that did not enter the trap.

The trap was placed adjacent to herb-rich grassland at grid ref. TQ 2402378115 a little to the north-west of the Field Road gate. Power was sourced from 77 Claxton Grove via cable running over the cemetery wall.

The lamp was lit at dusk just after the cemetery was closed to the public. The trap was blocked and the catch sorted at 0545 hours the following morning.

Conditions were very good for moth activity. The temperature was 23 degrees Celsius at 2200 hours falling to a minimum of 19 degrees overnight, with light cloud cover increasing and a moderate SW wind at dusk becoming lighter and moving NW by dawn.

A total of c.606 moths comprising 113 species were recorded (see sheet ’16 Jul 2014’ on the accompanying Excel file) including four which have Nationally Scarce B status, 87 having ‘Common’ status, 18 having ‘Local’ status and 3 which are classed as Migrants. (The status of Prays ruficeps has not yet been classified). Sixteen species were confirmed or identified by dissection and microscopic examination of the genitalia.

Reviewing the results systematically, there is a noticeable assemblage of species more commonly found in dry pasture, acid grassland and coastal habitats. Interestingly, historic and modern records of several species originate from localities close to the River Thames. In particular, the following fall into this group: Monochroa lucidella, Caryocolum fraternella, Coleophora striatipennella, Coleophora argentula, and Dichrorampha vancouverana. M. lucidella has apparently been recorded only once before in Middlesex and is generally very rare in western London. It is possible that the very strong westerly winds preceding the survey could have blown this moth from another site, possibly the London Wetland Centre or Lonsdale Reservoir where its larval foodplant, common spike-rush, grows. Likewise only a few Middlesex records exist for C. fraternella, a species of dry grassland and heath whose larvae feed on stitchwort and mouse-ear. Both C. striatipennella and C. argentula are uncommon in the inner London area; the former’s foodplant is lesser stitchwort and the latter feeds on yarrow. Timothy Tortrix Aphelia paleana is also rare in inner London; the last record is thought to have been of several specimens taken in Regent’s Park in 2003. E. cana and E. hohenwartiana are tortrixes of dry pasture whose larvae feed on thistles and knapweeds. Another tortrix Dichrorampha vancouverana is uncommon in inner London except for a few records close to the Thames where its foodplants, yarrow and tansy grow. The pyralid Synaphe punctalis is a moth found mainly in dry, coastal habitats; there is only one previous Middlesex record, that being from Bushy Park in 2007. Another most unusual record for inner London is the Brown Plume Stenoptilia pterodactyla whose larvae feed on germander speedwell. Apparently there is only one other Middlesex record for this species: a singleton at Hampstead in 1987.

Species of moths with lichen-feeding larvae also feature in this list: e.g. Common Footman, Scarce Footman, Tree-lichen Beauty and Marbled Beauty. The Tree-lichen Beauty is a relatively recent colonist with the first Middlesex specimen being recorded in Regent’s Park in 2003. Prior to this date it occurred only as a rare migrant in southern England. It is now well established in the capital.

During a recce of the cemetery’s habitats on 4th November 2013 a number of moth leaf-mines were recorded on trees and shrubs (see sheet ‘4 Nov 2013’ on the accompanying Excel file). All are fairly commonplace. The Horse Chestnut Leaf-miner Cameraria ohridella is a serious pest species which has spread rapidly in England since its arrival in the Wimbledon area of London c.2002. Another pest species, the Gypsy Moth Lymantria dispar was recorded in larval stage just outside the confines of the cemetery (Ruth Savery pers.comm.).

Combining records from the two lists provides a total of 124 species of moths recorded so far within the cemetery.

I am most grateful to Abel Hadden and Ruth Savery for their general assistance, and also to The Friends of Margravine Cemetery for funding this survey. Especial thanks are also due to Chris and Robin Bayliss for kindly allowing me to use their electricity supply to run the trap.