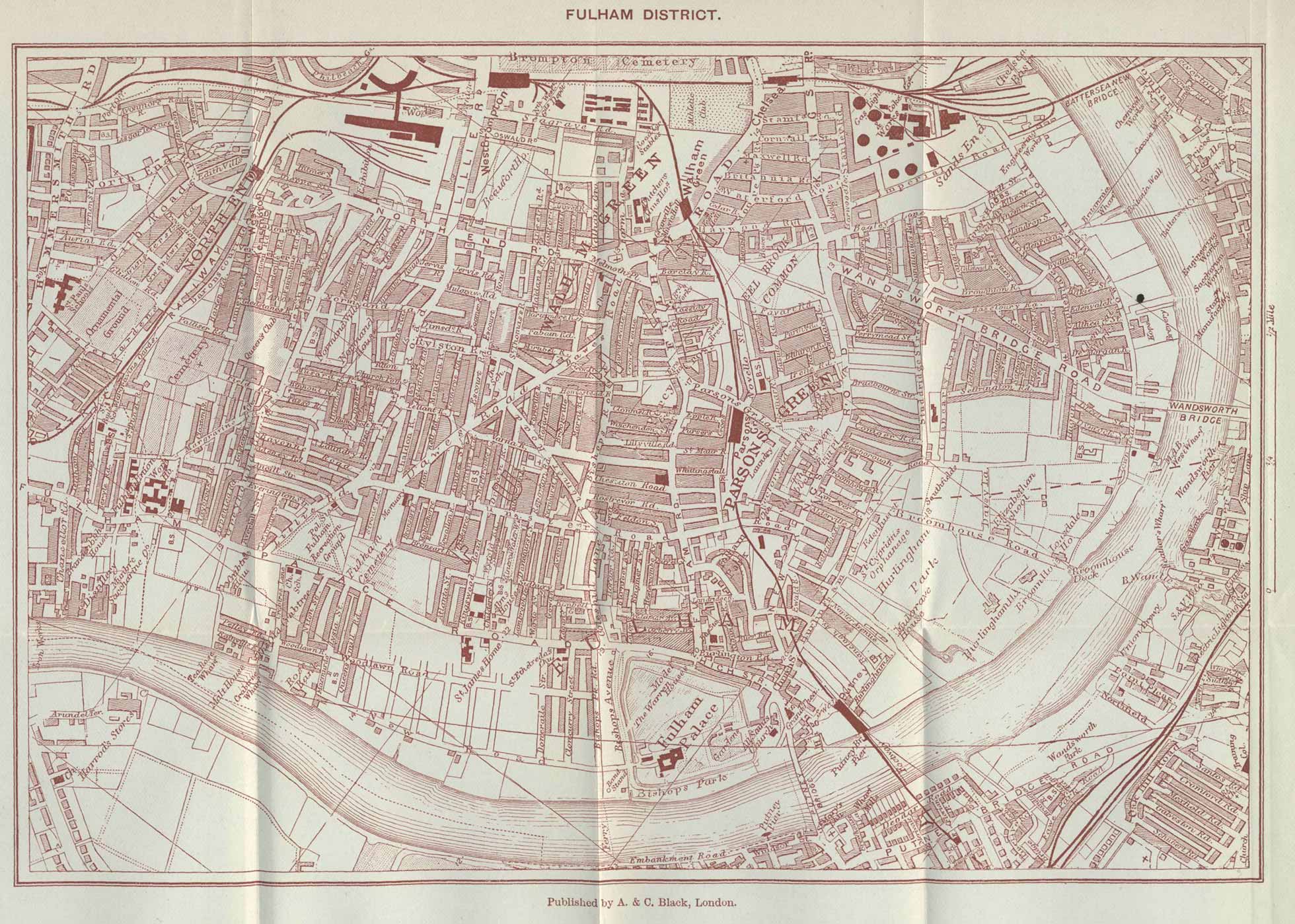 The entrance to Queen’s Club grounds is in the Comeragh Road. On the right of the gate is a grand-stand, from which a fine view of the eleven or twelve acres of ground can be obtained. Along the west side run the principal buildings, including secretary’s offices, grand-stands, tennis and fives courts, etc. The covered lawn-tennis courts are laid with great care and expense, the floors being of American maple, screwed and fitted over a patent wooden floor to ensure absolute accuracy. The ladies’ lawn-tennis championship is played off here. The great public event of the year is the Oxford and Cambridge sports, which in interest rank after the boat-race and cricket-match.

Close to Queen’s Club is the Hammersmith cemetery, an extensive piece of ground of some twenty acres. There is a broad gravel walk down the centre, and two small chapels, round which the graves are thickly clustered, spreading gradually westward as space is required. The first burial took place in 1869. The principal entrance is in the Margravine Road. The significance of this unexpected name in such a position is explained by the fact that the Margravine of Brandenburg-Anspach had a house near the river in this part for many years. It is described in detail below.

Just across the road is the Fulham and Hammersmith Union Workhouse and Infirmary, facing Fulham Palace Road. Between the workhouse and the river is a stretch of land used by market-gardeners. It was by the riverside that Brandenburg House, built by Sir Nicholas Crispe in the beginning of Charles I.’s reign, was situated.General Fairfax quartered himself here in 1647 during the Civil War, and his troops afterwards plundered the house; but at the close of the war Sir Nicholas returned and restored his property to its former state. After his death in 1666 it descended to his nephew, who sold it seventeen years later to Prince Rupert, who gave it to Margaret Hughes. It passed through the possession of various owners. One of these, George Dodington, afterwards Lord Melcombe, repaired and modernized it, altering the name to La Trappe. In 1792 it became the property of the Margrave of Brandenburg-Anspach and Bayreuth, and at his death the Margravine, formerly Lady Craven, continued to live there. Faulkner gives a minute account of the house and a long inventory of all the pictures in it while it was the residence of this lady. She built a theatre near the waterside, and herself took part in the performances. Bills of the plays in which her name appears are still extant. One of them is preserved in the Hammersmith Free Library. Though Brandenburg House was situated in Fulham, it is often described and spoken of as in Hammersmith. This is perhaps owing to its connection with Sir Nicholas Crispe, who was a great benefactor to the latter parish, and perhaps because the house existed when Hammersmith and Fulham were still one parish. Lysons says that during the interregnum it was proposed to make the hamlet of Hammersmith parochial, and add to it Sir Nicholas Crispe’s house and a part of North End, but, as stated, the separation of the parishes did not take place until 1834.

(Reproduced by kind permission of the authors)