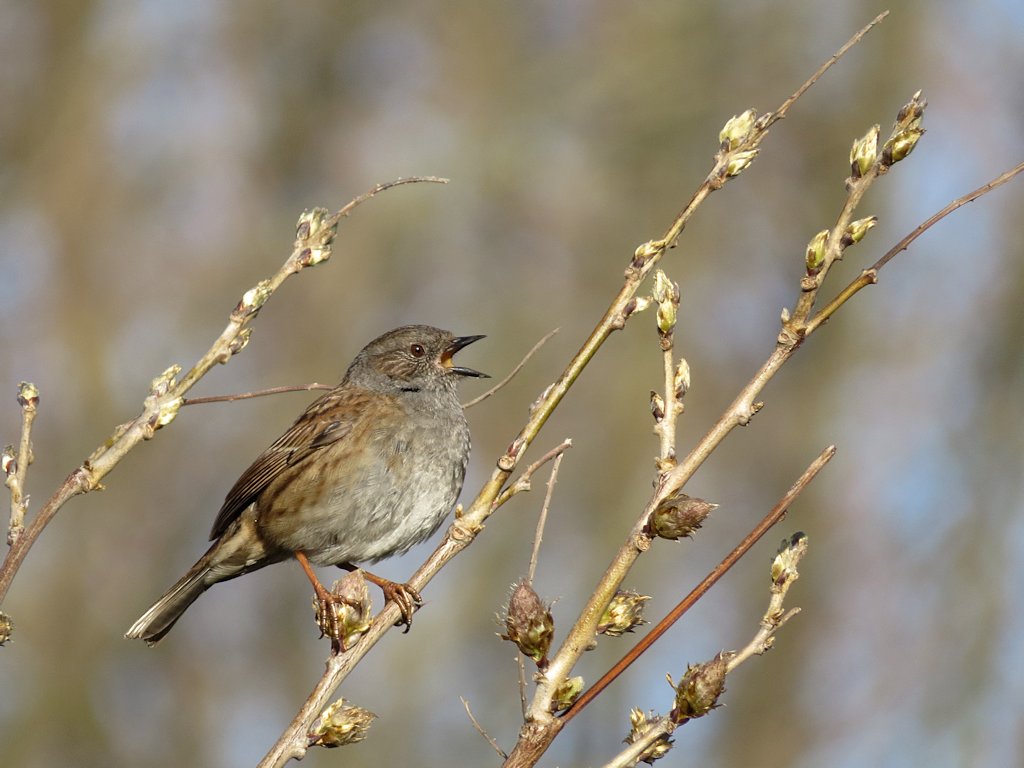 Bird count. Scroll down below or click here for the monthly tables.

The monthly bird count has a pleasing predictability about it, yet it brings some exciting surprises from time to time.

The winter months are often cold first thing, yet are good for visibility – with no leaves on the trees. Spring is full of birdsong from our resident bird population and nest building and feeding of young. We have a number of thick hedges that provide cover despite the high foot fall – commuters walking between tube and hospital or home, and good cover from the high population of squirrels always ready for an egg or two. August becomes the quiet month when bird song drops to its lowest, and autumn the birds are hopefully building up strength for winter. We often see wood pigeons and others gorging on berries. Seasonal visitors include the large flocks of redwing (with fieldfare intermingled) that we have had visit in recent years around the January/February time, the swifts overhead from May until end of July and the flocks of starlings when the areas of long grass begin to set seed.

Above us there are often gulls and cormorants from the nearby Thames – and the occasional sparrow hawk or kestrel, but we don’t count these. The most spectacular of the birds of prey are our two peregrine falcons that rear their young on a balcony on Charing Cross hospital. We see them perched on one of the down pipes watching us as we record them. Occasionally we see a bird blown off course and landing briefly in the cemetery such as the spotted fly catcher (June 2013).

How the count is done

We carry out the bird count at the same time of day once a month, and walk the same course. Certain species are harder to record as they move around a great deal. We make an educated guess of who we have counted already, sometimes going by how many we can see at any given time. This tends to include crows, wood pigeons, feral pigeons, redwings, goldfinches and long tailed tits. We find the birds often by sound, picking up song and then stopping and looking carefully for the bird we expect to see. Movement, even in leafy trees, is very useful, and a knowledge of what habitat different species favour – starlings in the grass, blackbirds on the ground under the hedges, wood pigeons in the big trees, smaller birds in the shrub and hedges, robins begging to be seen. We also know different parts of the cemetery favoured by different birds, and who we expect to see on the birdfeeders in neighbouring gardens over the wall. We don’t record if not sure, but we do make a note of those heard but not seen.

Who holds the records? The smallest bird is the goldcrest, the largest is the female peregrine falcon. One of the loudest is the wren! The biggest flocks are the visiting feral pigeons and redwings. The bird most consistently with the biggest count is the blackbird (15 to 30+) with numbers swollen by influxes of visitors and juveniles in summer. The dramas in the cemetery include competition for nesting holes particularly in the past between great spotted woodpeckers and ring necked parakeets, both of which incidentally, have provided a meal for the falcons. Over the years, we are building up a good picture of the bird population of the cemetery.

For January 2014 to June 2014 tables click here or scroll down below. To return to the top of this page click here.

To return to the top of this page click here

To return to the top of this page click here.